King Solomon’s Ring
King Solomon had a ring on which were inscribed the words “This too shall pass.” The meaning is clear: don’t get too high and don’t get too low. Try to keep an even temperament. It’s the surest road to happiness.

The Spiral Staircase
Dennis talks to Dr. Stephen Marmer, member of the clinical faculty of the UCLA School of Medicine and psychiatrist in private practice in Brentwood, CA, about personal growth issues that recur in our lives. Each time we confront these issues, we do so from a different perspective.

The Male Condition
Men make themselves unhappy by bemoaning their lack of achievement. At 30, they should have had more success, at 40, at 50, at 60 and all the years in between. No matter how much success a man has, he’s usually disappointed that he didn’t further, but no one can achieve what they imagine. Just recognizing that this problem is universal can alleviate some of the pain.

Life is Relentless
This is one of Dennis’s great lines – life is relentless. There are no time outs. Every day we battle something in our effort to stay happy. Different people have different battles. But everybody has something. Simply recognizing this fact, makes the struggle a little easier.

Miserable by Choice
We assume that everyone wants to be happy. But is this true? Are there are unhappy people who relish their misery? And if so, what are the reasons?

In the Wilderness
The nature of life is to wander in the proverbial wilderness. That “wilderness” can take many forms – career, spiritual, relationships. Sometimes we find a way out; sometimes we don’t. Even Moses didn’t make it to the Promised Land. But how we come to terms with this idea is a key to living a happier life.

Bedtime
Is it important for couples to go to bed at the same time? What do you do if you are morning person and your spouse is a night owl?

Who Deals with Getting Older Better?
The instant reaction is that growing older is harder for women, but upon further examination, nearly all callers, women and men alike, believed that in general it is harder for men. Dennis opened up the hour contending that it was equally hard for both sexes, but by the end, agreed with his callers.

Propose Already
Dennis has a challenge to single men: why dont you get married? He deals with objections, the usual and the unusual.

How to Stay Faithful
Most men have to confront the temptation to stray sometime in their life. How does one resist this temptation? Dennis offers six compelling reasons not to stray or, to put it another way, how to stay faithful. Male callers weigh in with their own suggestions.

Deconstructing the Montage
Dennis with some help from Allen deconstructs the clips that making up the opening montage. Each one contains its own important male/female issue.

Lessons Learned
Were supposed to get wiser as we get older, so what have you learned? What do you know today that you didnt know twenty years ago? What has surprised you?

Why the Jews?
Dennis never uses the Bible as a basis of predictions, but there is one verse Genesis: 12:3 those who bless the Jews will be blessed and those who curse the Jews will be cursed that has been proven true. There is no better example than the United States.

Are All the Religions the Same?
Dennis talks to Stephen Prothero, professor of religion at Boston University. God Is Not One: the Eight Religions that Run the World — and Why Their Differences Matter.

When Good People Do Bad Things
Most of the evil done in the world are done not by evil people, but by good people aiding and abetting very bad ideas. Its not enough to do good. You need wisdom.

God as He
Feminists and the Politically Correct have rebelled against the idea that God is depicted in the masculine. Are their objections valid? Or are there very important reasons why God has always been referred to as He?

Fundamental Difference
To be on the Left is to imagine a utopian future no poverty, no greed, no racism, and so on. To be on the Right is to have the opposite view. Those on the Right imagine how much worse things can be. This is the fundamental difference between two views of the world. 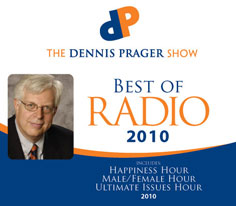