Many Roads to Happiness
There isn’t one way to be happy. There are many.

People Attraction
How many people have sour-tempered friends? The answer is very few. Dennis explains why.

When You feel Unhappy
How do you cure unhappiness? Dennis has four solutions.

Learning to Deal with Unhappiness
Happiness is not the norm. Kids have to learn this. If we shield them from failure and unhappiness, we are doing them a great disservice.

Look Back in Happiness
Do you look back on your life and say “that was a great time?”Did you know it when it was happening?

The Hole
Everyone has “a hole”in their life, something they had a reasonable expectation would happen and didn’t. Recognizing this basic truth makes it easier to be happy.

The Marriage Killer
What is the marriage killer? According to an article in the Wall Street Journal it’s not problems with money or sex. It’s much more mundane: nagging.

Shut Down
The male response to marital unhappiness is to shut down.

Alison Armstrong: The 3 P’s
Renowned relationship expert, Alison Armstrong, talks about our three main priorities: procreate, protect, and provide. The order is very important and leads to some surprising and profound conclusions about how men and women relate to one another.

Levels of Attraction
How does a man attract a woman? Women love men who they can respect.

Frustrated Men
It is the nature of men to be sexually frustrated. We can’t get all the sex we want. But we get a lot in return for sublimating our sexual drive — a civilized life.

Having it All
A new “can women have it all?”- children and career – controversy has sprung forth thanks to a new article in Atlantic Monthly magazine.

Something from Nothing
A prominent scientist claims that something (like the Universe) can come from nothing based on certain universal physical laws. But where did those laws come from? The truth is that science can’t prove how the Universe began. It’s nonsense to suggest that it can.

Acquiring Wisdom
What have you learned in the last 10 or 20 years about life? Dennis has a list. So do callers.

The Righteous Mind
Dennis talks to Jonathan Haidt, professor of social psychology at the University of Virginia. His new book, a NY Times best-seller, is The Righteous Mind: Why Good People Are Divided by Politics and Religion.

Irrational
Everyone holds irrational beliefs- both the religious and the secular.

Pointless
Woody Allen, in an interview in the Wall Street Journal, describes his view of life- pointless. He’s honest. Without faith in a good God, life can have no ultimate meaning.

What’s Wrong with Incest?
If love is the only standard for marriage, then what’s wrong with polygamy or incest? For those who want to change the definition of marriage, the answer has to be “nothing.”Most people who support same sex marriage don’t understand the consequences of their position. 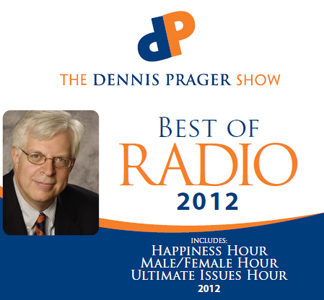