The 2014 Best of Radio collection includes all of the segments from the Best of Happiness, Best of Male/Female and Best of Ultimate Issues hours. The included shows were hand-selected by Dennis and Allen themselves.

Life Is Tough
Everyone knows this. But most try not to think about it. This is not a good happiness strategy. Recognizing that life is tough gives you the perspective needed to achieve happiness.

Depression
Dennis talks to Dr. Stephen Marmer, member of the clinical faculty of UCLA Medical School and psychiatrist in private practice in Brentwood, CA. The subject is: what is the difference between feeling depressed and being depressed. And what can you do about either one?

Was That Fight Worth It?
We fight about so many things with our friends and our spouses. How many of these fights are really worth the pain they generate? We waste a lot of time not being happy.

Darkness at Noon
People think that somber, dour and dark equals deep. And that the happy are shallow. The truth is the opposite.

You Owe Me
Feeling that the world owes you something is a major impediment to a happier life. But we are raising a generation who carry that belief. What will be the consequences?

Is Happiness Boring?
Madison Avenue and Hollywood promote an exciting life. Does happiness get a bad rap because it’s perceived as boring? Is it?

Alison Armstrong: Emasculation
A woman is capable of emasculating her husband. But why would she do it? Does she even know she is doing it?

Wives and Lovers
Dennis deconstructs a Burt Bachrach/Hal David song from 1963, “Wives and Lovers.”This song would be mocked mercilessly on a college campus today, but contains real wisdom.

Women Think
Women think that men think like they do. Here’s an example: women don’t care very much how their husbands look, so they think men shouldn’t care much about how they look. But there are many more.

Peace or Sex
Is there something men want more than sex? Dennis has something in mind. But so do callers.

George Clooney’s international human rights lawyer bride has taken his name. A fair segment of the feminist world is upset. Does a woman lose her identity when she takes her husband’s name?

Science and God
Dennis talks to Amir Aczel, 2004 winner of the Guggenheim Memorial Foundation Fellowship; currently a research fellow in the history of science at Boston University. His new book is Why Science Does Not Disprove God.

Shake Hands with a Murderer
Dennis reflects on his experience at Angola State Prison in Louisiana. When a Death Row inmate offers to shake his hand, Dennis isn’t sure whether he should take it.

The Afterlife
From a purely logical point of view, if there is a good God who governs the universe and demands moral behavior from his creations, there must be an afterlife. 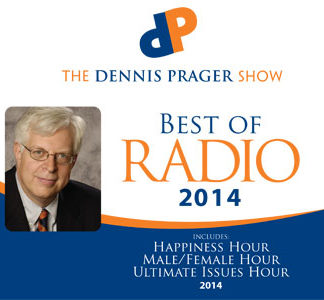