The 2015 Best of Radio collection includes all of the segments from the Best of Happiness, Best of Male/Female and Best of Ultimate Issues hours. The included shows were hand-selected by Dennis and Allen themselves.

Are You Lucky?
What percentage of people have led lives without serious pain? How many people have lucked out in all four of these areas? Financial, moral, parenthood, and marriage.

Management
Trying to manage someone else’s life can be a source of unhappiness. Sure, you can manage your young children. But after they are teenagers?

Angry
It’s very hard to be angry and happy. Do angry people use their anger to manipulate others?

Let it Go
Almost every day something happens that it is annoying or frustrating. To be happy you have to calibrate how you react to these annoyances and frustrations.

Marmer: Complexities?
Dennis talks to Dr. Stephen Marmer, member of the clinical faculty at UCLA Medical School and psychiatrist in private practice in Brentwood, CA. Dennis opens up the lines for callers, but has a bunch of questions of his own.

Waste of Time
Spending time being unhappy is a tremendous and personally costly waste of time.

The Swimsuit Issue
A feminist scholar raises the usual feminist complaint against this year’s Sports Illustrated swimsuit issue: it objectifies women. But what does that really mean? And, is it bad?

He Wants You (2)
Dennis discusses his latest Prager University video course, He Wants You. Sure, men “look,”but here’s the good news: it doesn’t mean anything.

Alison Armstrong: Frustrations
Dennis talks to Alison Armstrong, renowned relationship expert and creator of The Queen’s Code Workshop. The topic is: what frustrates each sex about the other?

Are Women Less Ambitious than Men
Dennis plays a heated exchange from “Hannity”between Tamara Holder and Gavin McGinnis. The subject is, are women less professionally ambitious than men? If they are, is that a put down of women?

Great Marriage, Great Career
Is there something men want more than sex? Dennis has something in mind. But so do callers.

Turnaround
If you were in a troubled marriage, what did you do to turn it around?

Who Wants to Be Free?
We assume that people want to be free. But is that true?

The Moral Arc
Dennis talks to Michael Shermer, founding publisher of Skeptic magazine.. His new book is The Moral Arc:How Science and Reason Lead Humanity toward Truth, Justice and Freedom.

The Third Commandment
Dennis has been doing a lot of interviews for his new book on The Ten Commandments: Still the Best Moral Code. The commandment that has attracted the most comment is the third commandment: Do Not Take the Lord’s Name in Vain. But the King James translation is incorrect. Try this: Do Not Misuse God’s Name.

In Defense of Traditional Marriage
Does the Constitution contain a right for people of the same sex to marry? Dennis makes the case that should be made (but probably won’t be) in defense of the traditional definition of marriage.

Barriers to Belief
What stops you from believing in God?

Human v Animal
The killing of Cecil the Lion has raised the fundamental question: what is more valuable human life or animal life?. 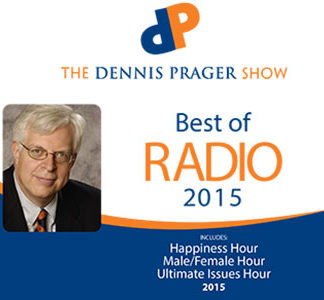