Lessons Learned
We’re supposed to get wiser as we get older, so what have you learned? What do you know today that you didn’t know twenty years ago? What has surprised you?

Why the Jews?
Dennis never uses the Bible as a basis of predictions, but there is one verse Genesis: 12:3 – those who bless the Jews will be blessed and those who curse the Jews will be cursed – that has been proven true. There is no better example than the United States.

Are All the Religions the Same?
Dennis talks to Stephen Prothero, professor of religion at Boston University. God Is Not One: the Eight Religions that Run the World — and Why Their Differences Matter.

When Good People Do Bad Things
Most of the evil done in the world are done not by evil people, but by good people aiding and abetting very bad ideas. It’s not enough to do good. You need wisdom.

God as He
Feminists and the Politically Correct have rebelled against the idea that God is depicted in the masculine. Are their objections valid? Or are there very important reasons why God has always been referred to as “He?”

Fundamental Difference
To be on the Left is to imagine a utopian future – no poverty, no greed, no racism, and so on. To be on the Right is to have the opposite view. Those on the Right imagine how much worse things can be. This is the fundamental difference between two views of the world. 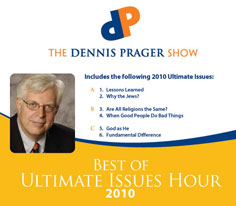