Something from Nothing
A prominent scientist claims that something (like the Universe) can come from nothing based on certain universal physical laws. But where did those laws come from? The truth is that science can’t prove how the Universe began. It’s nonsense to suggest that it can.

Acquiring Wisdom
What have you learned in the last 10 or 20 years about life? Dennis has a list. So do callers.

The Righteous Mind
Dennis talks to Jonathan Haidt, professor of social psychology at the University of Virginia. His new book, a NY Times best-seller, is The Righteous Mind: Why Good People Are Divided by Politics and Religion.

Irrational
Everyone holds irrational beliefs- both the religious and the secular.

Pointless
Woody Allen, in an interview in the Wall Street Journal, describes his view of life- pointless. He’s honest. Without faith in a good God, life can have no ultimate meaning.

What’s Wrong with Incest?
If love is the only standard for marriage, then what’s wrong with polygamy or incest? For those who want to change the definition of marriage, the answer has to be “nothing.”Most people who support same sex marriage don’t understand the consequences of their position. 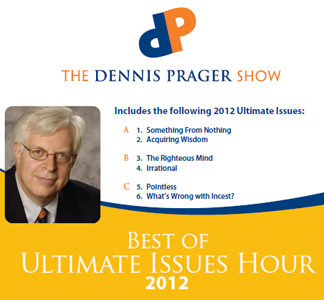