What God Do You Believe in?
It’s not enough to say you believe in God. Who is that God?

Three Questions for Atheists
Dennis poses three questions that he likes to ask Atheists: Do you ever doubt your Atheism; How did everything come into existence; and do you hope you’re right or wrong?

The Moral West
Why is Western Civilization, the source of so much moral and material progress, so hated by so many. Dennis has his theories. So do callers.

Contemptible America
This Fourth of July weekend, there were a spate of opinion pieces arguing how bad America is and how immoral its founding. This is no longer an exception, but rule for the major media during the Independence Day holiday. Can America survive if its own people despise it?

Forcing Religion
Should you force religious education on your children? Or is it counterproductive? Dennis has his position. So do callers. 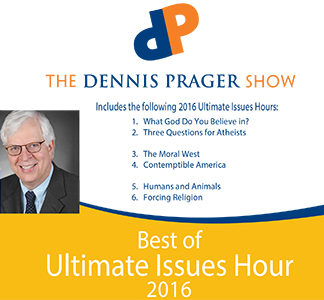