The Prager U “Best of 2015” DVD is a collection of the best thinkers and topics who contributed to the 2015 educational courses. If you purchased the “First Semester 2015” DVD, 11 of the 20 videos below will be repeats. However,?Prager U DVDs always make a thoughtful birthday or holiday gift, a fantastic graduation gift, or a fine addition to your own DVD collection.

On this Prager U DVD, you will find some of the brightest thinkers presenting their best ideas in 5 minutes

Does free enterprise hurt the poor? Is it unfair and driven by greed? Did it cause the Great Recession? In five minutes, Arthur Brooks answers these questions and more about capitalism.

2) Does Science Argue for or Against God? ?Eric Metaxas

Why are we here? Literally. The latest science says we shouldn’t be. It says that the chance life exists at all is less than zero. So, is science the greatest threat to the idea of Intelligent Design or is science its greatest advocate? Best-selling author and lecturer, Eric Metaxas, poses this intriguing question and comes up with a very unexpected and challenging answer.

3) Do the Rich Pay Their Fair Share? ?Lee Ohanian

Do the rich pay their fair share of taxes? It’s not a simple question. First of all, what do you mean by rich? And how much is fair? What are the rich, whoever they are, paying now? Is there any tax rate that would be unfair? UCLA Professor of Economics, Lee Ohanian, has some fascinating and unexpected answers.

4) He Wants You ?Dennis Prager

Men look at pretty women. That goes for men who are married, men who are dating, and men who are single. That’s their nature. But is this built-in attraction with the female body a threat to their spouse, girlfriend, or partner?

Is profit a dirty word? Would the world be better off without them? Or are profits progressive — the only thing that can move potatoes from Idaho to Manhattan and medicine from America to Africa? Professor and economist Walter Williams explains.

Does race trump truth? In a confrontation between police and perpetrators, what is more important? Facts or skin color? When protests morph into riots, do we excuse bad behavior based on race? If we do, how are we ever going to end racism? Chloe Valdary, a student at the University of New Orleans, confronts these critical questions and offers a compelling answer.

7) Why You Should Love Fossil Fuel ?Alex Epstein

Every year on Earth Day we learn how bad humanity’s economic development is for the health of the planet. But maybe this is the wrong message. Maybe we should instead reflect on how human progress, even use of fossil fuels, has made our environment cleaner and healthier. Alex Epstein of the Center for Industrial Progress explains.

8) Should America be the World?s Policeman? ?Bret Stephens

Should America be the world’s policeman? Does the world even need a policeman? Or would humanity be better off if America weren’t the dominant military superpower? Pulitzer Prize-winning columnist and foreign affairs expert Bret Stephens weighs in.

9)?The Speech Every 2015 College Grad Needs to Hear ?George Will

There were thousands of college commencement speeches around the country this year for the Class of 2015. But there was one missing — one very truthful, funny and witty speech that graduates should’ve heard, but didn’t. Well, here it is, spoken by George Will, Pulitzer Prize-winning columnist at the Washington Post.

What makes someone become an Islamic extremist? Is it poverty? Lack of education? A search for meaning? Haroon Ullah, a senior State Department advisor and a foreign policy professor at Georgetown University, shares what he discovered while living in Pakistan.

12) Why I Left Greenpeace -Patrick Moore

Patrick Moore explains why he helped to create Greenpeace, and why he decided to leave it. What began as a mission to improve the environment for the sake of humanity became a political movement in which humanity became the villain and hard science a non-issue.

13) What They Haven?t Told You About Climate Change -Patrick Moore

Since time immemorial, our climate has been and will always be changing. Patrick Moore explains why “climate change,” far from being a recent human-caused disaster, is, for a myriad of complex reasons, a fact of life on Planet Earth.

Is the nuclear agreement between the United States and Iran a good or bad deal? Would it be harder or easier for Iran to develop nuclear weapons? Would it make Iran and its terror proxies stronger or weaker? Should the U.S. Congress support or defeat the deal? Dennis Prager answers these questions and more.

15) Was the Civil War About Slavery? -Colonel Ty Seidule

What caused the Civil War? Did the North care about abolishing slavery? Did the South secede because of slavery? Or was it about something else entirely…perhaps states’ rights? Colonel Ty Seidule, Professor of History at the United States Military Academy at West Point, settles the debate.

16) The Most Important Question About Abortion -Dennis Prager

Is abortion right, or is it wrong? It’s the big question that’s lost in a societal debate that’s mostly focused on legality. But, really, whether it’s right or wrong is the most important question about abortion.

17) Are You on the Wrong Side of History? -Jonah Goldberg

Are you on the wrong side or the right side of history? Is there even a “wrong side” or a “right side”? What do those terms mean and why do politicians and pundits use them? Nationally syndicated columnist and best-selling author Jonah Goldberg explains.

Should offensive speech be banned? Where should we, as a society, draw the line where permitted speech is on one side, and forbidden speech is on the other? Should we even have that line? And should free speech be limited by things like trigger warnings and punishments for microaggressions? Greg Lukianoff, president of the Foundation for Individual Rights in Education, answers these questions and more.

Is capitalism moral or greedy? If it’s based on greed and selfishness, what’s the best alternative economic system? Perhaps socialism? And if capitalism is moral, what makes it so? Walter Williams, a renowned economist at George Mason University, answers these questions and more.

20) Why the Right is Right -Greg Gutfeld

What makes conservatism right? If you’re a conservative, you should know why you’re right. If you’re not a conservative, why should you think about becoming one? Greg Gutfeld, bestselling author of, “How To Be Right: The Art of Being Persuasively Correct”, explains. 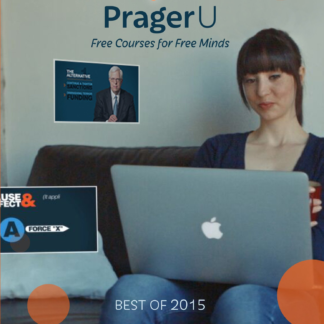