The Complete Collection of Religion, America and Life Lectures (PLUS 6 Bonus Lectures Included For Free)

The Complete Collection of Dennis Prager’s Lectures and Speeches onto a USB Flash Drive. Over 100 hours of uncut audio.

Dennis Prager’s lectures and speeches have been captivating audiences for over 20 years. We have compiled over 70 of his most compelling and unforgettable lectures and speeches during this time. For the first ever, you can own them all on a single USB Flash Drive and listen from the convenience of your own home.

Whatever one’s faith is or political views are, you will enjoy and appreciate Dennis’ own brand of opinion and insight. Feel like you are personally in the lecture hall while Dennis gives his own unique take on Religion, America and Life.

All of the speeches and lectures will be loaded onto a USB Flash Drive, and organized by Religion, America, and Life for you. No need to keep track of multiple CDs or go to a website to listen. Now you can have the entire collection in the palm of your hand!

Bonus Lectures not included in any individual collection! 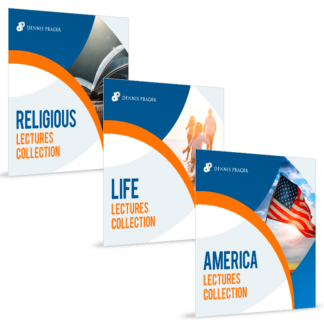 You're viewing: The Complete Collection of Religion, America and Life Lectures (PLUS 6 Bonus Lectures Included For Free) $995.00
Rated 5.00 out of 5
Add to cart