The Brilliance of the Bible

This special feature series of Ultimate Issues Hours is dedicated to exploring the relevance of the Bible. It’s a relatively new idea that Biblical literacy is not important. Dennis poses the question, “Do you have an instruction manual? If not the Bible, then what?”

Prager on the Bible, Part 1: “Says Who?!”
This is the first of a series of 2011 Ultimate Issues Hours dedicated to exploring the relevance of the Bible. It’s a relatively new idea that Biblical literacy is not important. Dennis poses the question, “Do you have an instruction manual? If not the Bible, then what?”

The Fifth Commandment
The fifth of the Ten Commandments states that you have to honor your father and mother. Why does it say “honor”? not “love”? And what does it mean to honor your parents.

Love Thy Neighbor
Perhaps the most famous verse in The Bible is “love your neighbor as yourself.”? But rarely is the full verse quoted. This omission is critically important and says a lot about our modern, secular culture

Hating Evil
To love God one has to hate evil. This is the fourth installment in Dennis’s series on explaining key concepts from the Bible.

Do Not Favor the Poor
Dennis examines an important, but rarely cited verse in the Bible – do not favor the poor in judgment (Leviticus 19:15). This is the fifth in Dennis’s series explaining the relevance of the Bible.

God Has Moral Will, Nature Doesn’t
A first principle of the Bible expressed in Genesis 1:1 is that God created nature. He is above nature. Nature is amoral. God insists on ethical behavior. This is the sixth in Dennis’s “Relevance of the Bible”? series.

Capital Punishment
Capital punishment is the only law repeated in all five books of the Moses, the Torah. That’s how central it is to the Bible. It begins with Genesis 9:6. This is the seventh installment in Dennis’s Bible series.

Separation
In the eighth installment in his series explaining key Bible concepts, Dennis discusses the importance of separation. Among the important separations noted in the Bible are Man/God, Man/Animal, Man/Woman, and Sacred/Profane.

Wisdom Begins
One of the most common phrases in the Bible is “the beginning of wisdom is the fear of God.” You can find it in Psalms, Proverbs and Job. Dennis explains what the verse means. This is the 9th in Dennis’s Brilliance of the Bible Series.

You Shall Be Holy
Dennis resumes his series on the Brilliance of the Bible. What does it mean to be holy?

Do Not Steal
You can make the case that all of the Ten Commandments can be encompassed in the eighth commandment, Do Not Steal. For example, Do Not Murder can be interpreted as you can’t steal a life.

Not Basically Good
Dennis explains the Bible’s position on human nature – we are not born good. We need to values to shape our nature. This is the twelfth of his Brilliance of the Bible Series.

Arguing with God
The Hebrew Bible introduced a unique concept — man could question and argue with God. That’s what Abraham does at Sodom and Gommorah.

Walk Humbly
Dennis explains what it means to do good and walk humbly based on Micha 6:8. Part 14 in Dennis’ Brilliance of the Bible Series

Brilliance
Dennis reviews his fifteen part series highlighting the brilliance of the Bible, synthesizing the themes he’s developed over the course of the year.

God as He
Feminists and the Politically Correct have rebelled against the Biblical idea that God is depicted in the masculine. Are their objections valid? Or are there very important reasons why God has always been referred to as “He?” 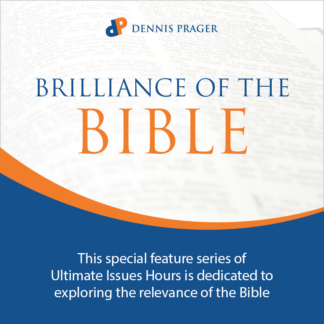