Who Wants to Be Free?
We assume that people want to be free. But is that true?

The Moral Arc
Dennis talks to Michael Shermer, founding publisher of Skeptic magazine.. His new book is The Moral Arc:How Science and Reason Lead Humanity toward Truth, Justice and Freedom.

The Third Commandment
Dennis has been doing a lot of interviews for his new book on The Ten Commandments: Still the Best Moral Code. The commandment that has attracted the most comment is the third commandment: Do Not Take the Lord’s Name in Vain. But the King James translation is incorrect. Try this: Do Not Misuse God’s Name.

In Defense of Traditional Marriage
Does the Constitution contain a right for people of the same sex to marry? Dennis makes the case that should be made (but probably won’t be) in defense of the traditional definition of marriage.

Barriers to Belief
What stops you from believing in God?

Human v Animal
The killing of Cecil the Lion has raised the fundamental question: what is more valuable human life or animal life?. 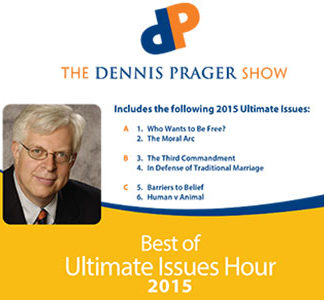