Men’s Sexual Nature 4: Adultery: What Is It and How Can It Be Prevented

With his characteristic compassion and good humor, Dennis reveals why adultery is a complex issue that can be better grasped with an understanding of male sexuality. Although Dennis believes adultery is a sin, he doesn’t believe it should automatically lead to a divorce. Dennis feels bad for all people affected by adultery, because even good people sometimes commit unholy acts.

1. The Old Testament defines adultery as extramarital intercourse with a married woman. According to the New Testament, however, one can commit adultery simply by lusting for someone.
2. Betrayal and adultery are often very different things. For example, a husband might be guilty of betrayal–but not infidelity–if he opens up emotionally to a woman other than his wife.
3. Women usually only commit adultery when their husbands aren’t fulfilling their emotional needs. Physical attraction alone isn’t likely to lead women to be unfaithful. Men, on the other hand, are very easily able to separate sex from emotion.
4. While the cheater is the one who needs to seek forgiveness, Dennis also believes that mature people who have been cheated on will ask themselves how they can improve their relationships. 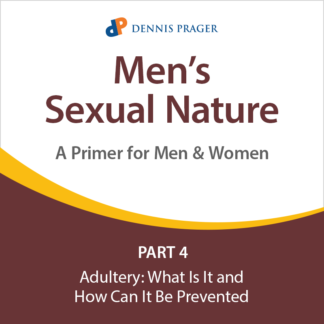 You're viewing: Men’s Sexual Nature 4: Adultery: What Is It and How Can It Be Prevented $57.60
Add to cart