Numbers I-VII: Chapters 1-34 is part of Dennis Prager’s verse by verse course on the Torah. If you love Dennis, then you will love his verse by verse interpretation of the Old Testament. The Torah is his passion.

In the words of Dennis:

The study of Torah is considered the greatest, in some ways, of all of the Laws because it leads you to the rest, says the Talmud. However, having said that, I am not an apologist for the Torah. If there is a moral difficultly, I acknowledge it. I don’t read it through the eyes of being a religious Jew alone and that’s the reason that people from many backgrounds enjoy this work and why people from many backgrounds do not like my work. I do not have a pre-existing agenda. I want to know, what does it really say, and is it relevant.

Read the verses while you listen:

*The recordings of these classes were originally made on audio-cassettes. To the best of our ability, we have enhanced the sound quality. 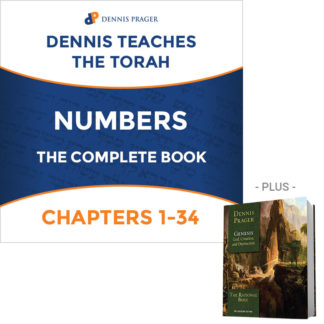